2.2.2 Characteristics of the Multilingual Readers' Theatre

GameLet was designed based on a didactic-methodology called "Multilingual Readers' Theatre" which includes multilingual texts developed during the international Erasmus+ project MELT (2014-2017). The objective behind the Multilingual Readers' Theatre, a cross-language variation of a cooperative reading aloud procedure, allows pupils to practise a theatre scene in groups until they are able to read it aloud fluently and expressively. The following topics will be addressed:

Occasionally, GameLet deviates slightly from the MELT version, which will also be addressed in this text.

Funded by the European Commission as a part of the Erasmus+ Programme 2014-2017, this MELT project was carried out by three universities that educate and train school teachers: Weingarten (Germany), St. Gallen (Switzerland), Vorarlberg (Austria) and the SCRIPT Inno of the Luxembourg Ministry of Education. In addition, various cooperating classes at each of the partner countries participated in the project (Information on the project and the numerous readers’ theatre plays may be downloaded from the project website: melt-multilingual-readers-theatre.eu/).

The Multilingual Readers’ Theatre (MELT) expands the traditional readers’ theatre, a well-researched literacy strategy, by means of a bilingual or multilingual approach, thereby responding to sociopolitical demands for increased multilingual competence (Kutzelmann et al., 2017). For this purpose, literary prose texts are transformed into multilingual dialogue-based readers' theatre plays. Reading aloud is practised in cooperative student work groups which are performed. The central training method in the traditional readers’ theatre and in MELT is repeated reading aloud, a technique with confirmed positive effects on reading fluency (NICHD, 2000). The readers’ theatre is one of the reading aloud methods able to achieve significant improvement in the area of reading fluency with regard to correct word recognition, reading speed and prosody while also significantly increasing motivation to read among youngsters. MELT takes advantage of multilingualism within a student body and sees it as an opportunity. Furthermore, it is able to provide a cooperative learning setting in which the heterogeneity of the students is seen as a resource. In this setting, students with stronger reading skills support those with weaker skills by acting as reading models and giving them feedback (Kutzelmann et al., 2017).

The uniqueness of the Multilingual Readers’ Theatre lies in its ability to support pupils with their ability to read fluently in both their native language and English as a foreign language. To do this, a given theatre piece is written in both English and the learners’ native language, hence creating a multilingual text.

In contrast to the MELT texts that may be written in as many as three to four languages, the GameLet podcast texts are written in only two languages. As the foreign language for all of the project partner countries (i.e., Greece, Germany, Switzerland, Austria and Portugal), English was chosen because it is the first foreign language taught in each of these countries. There are several reasons for using the MELT texts in GameLet: a) time limitations for the production of new texts during this project; b) prohibitive costs associated with third-party texts; c) best practice results with MELT texts, along with a high degree of acceptance by teachers and students alike. Teaching materials include multilingual read-aloud prose scripts for pupils and multilingual read-aloud texts for teachers.

In general, a Multilingual Readers' Theatre consists of several scenes made up of both narrator and character roles. For this purpose, excerpts or entire prose texts must be dramatised for the purpose of reading training that offers sufficient role changes and enough speaking parts for the individual characters. The read-aloud text for teachers serves as an introduction to the content of the Readers' Theatre. Moreover, it offers essential aspects of the plot, the central characters, the time and place of the action, and the initial clues to the underlying conflict.

In the following excerpt from the Readers' Theatre "Hansel & Gretel" (see table 2), a well-known Grimm’s Brothers fairy tale, English is used alongside the school language. The Readers' Theatre was designed for 6th or 7th year students, who in general, have been learning English for two to three years with approx. 4 lessons per week. Therefore, the foreign language parts of the reading (written in italics) consist of whole or several sentences, which are distributed among both the narrator and character roles. The example below illustrates the form of the texts as determined by the alternation of character and narrator roles. 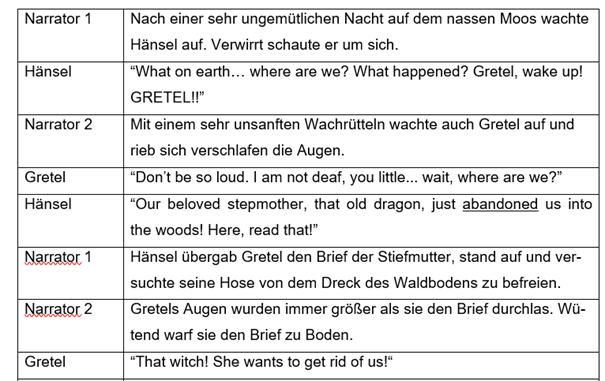 (*The following section is taken and translated from Massler/Theinert, 2017)

The didactic-methodological design of Multilingual Readers' Theatre and GameLet differs from earlier versions of the Readers' Theatre in the way language is used. First, the programmes use several languages into the theatre scripts. Second, the teacher or the GameLet model reader, whose audio can be accessed in the GameLet learning environment, read aloud in several languages before students begin to work on their texts with their respective group members.

GameLet read-aloud text scripts are normally written in two languages. Any given text, the length of which varies between 200 and 600 words, is taken from well-known literary works and used in its entirety for the readers’ theatre. Extracts from the beginning of the literary text are usually used to prepare pupils for group work, thus fulfilling the following principles:

The following text passage is an excerpt of a teacher’s read aloud text:

„Darling, I have a wonderful idea!”

„I know the perfect way to make the kids get along. I’m thinking about a challenge, which they’d need to solve together. It’d be best if this challenge could take place outdoors. Fresh air to cool down their temper and free their minds, you know? So just hand me your car keys and I’ll take care of the rest”

Code-switching, a communicative phenomenon observable among multilingual speaker writing and oral communication, is an important principle behind multilingualism in MELT and GameLet texts. In this context, code-switching is not so much a communicative strategy as it is a language learning tool for creating synergies between the classroom and foreign languages.

In accordance with language acquisition theory, the inclusion of code-switching aims to initiate cross-linguistic receptive processes, such as having learners decode foreign-language passages by referring back to the native language ones. This helps to encourage learner use of the available linguistic repertoire in order to accomplish a given task (cf. Ilg et al. 2015: 22). This in turn shows learners how to use their language skills to acquire other languages. Moreover, it has the potential to interest them to learn a foreign language.

With regard to language production and reception, code-switching in Multilingual Readers' Theatre and GameLet aims to expand learner productive vocabulary in both the foreign and native languages by means of repetitive reading. In this way, learners experience and practice a form of social multilingualism that is becoming increasingly typical in their lives as they switch between languages both receptively and productively (Busch 2013: 181; Oksaar 1980: 43).

Various theatre scenes are distributed among the work groups. The ideal group size of four learners allows the greatest amount of reading practice time and makes partner work easier to coordinate (e.g. with the help of a slightly modified form of tandem reading). In order for a multilingual readers' text to be performed in class, assorted work phases are necessary (cf. Fig. 2). A brief overview of this process is given below. A detailed didactic-methodological commentary can be found in Kutzelmann, Massler & Peter (2017). An educational film documenting the various work steps and diverse insights into teaching practices can also be found on the MELT project internet site (see above). 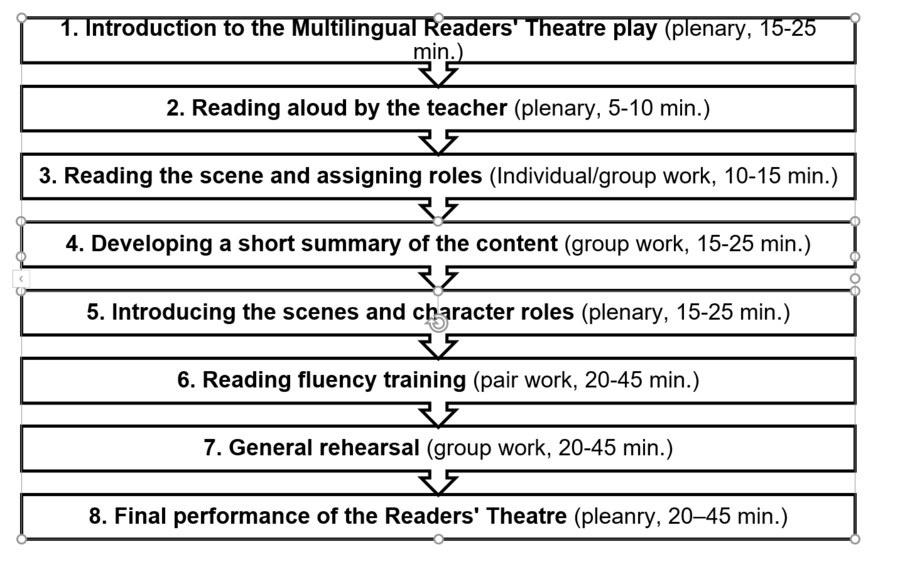 (1.) To begin with, the teacher introduces the Multilingual Readers' Theatre to the learners by describing the plot and central characters.

(2.) The teacher then reads an excerpt from the original text in two or more languages. While listening, the learners observe their teacher who acts as a model for the audible and visible means of shaping a reading text.

(3.) Learners are assigned to a work group. Before the reading roles are distributed among group members, learners silently read an assigned scene.

(4.) Learners are assigned a role within the scene that they should read a second time. During this stage, together as a group, they read aloud and clarify the meaning of keywords. After reading aloud a third time, each group prepares a short summary of the content, or illustrates a key moment of their scene in the form of a picture.

(5.) Back in class, each group then presents their scene. In this way, learners are able to develop an understanding of the whole Readers' Theatre play, across the individual scenes.

(6.) Learners read their role several times: half aloud with the help of tandem reading. This exercise is a slightly modified form of the "classic phonics tandem reading" (cf. Rosebrock & Gold 2018), in which the roles are read in pairs, simultaneously. To do this, one learner acts as a coach to the other. The “coach” places his/her copy of the scene in such a way that the “athlete” is able to follow and read along. During the first tandem practice session, the focus is on accurate decoding and pronunciation, especially in the foreign language. With increasing automation at the word and sentence level, and an increase in sight vocabulary, learners should have acquired more cognitive resources for a deeper analysis of the text. A good understanding of the scene leads to improved prosodic reading.

(7.) As soon as learners are able to confidently read their roles, each group conducts a dress rehearsal in which the individual roles are coordinated and practised together.

(8.) In the final stage, each group reads their scene to the class. The applause at the end of the performance rewards the learners for their achievements in the Multilingual Readers' Theatre, similar to how it does in any theatre. The Multilingual Readers' Theatre is therefore a cooperative form of exercise used to familiarise learners with the procedure after two or three performances: hence an important transferable reading experience. Moreover, learners should come to realize that, irrespective of language, reading fluency can be trained in this way.