2.2.3. GameLet: the Adaptation and Transformation of the MELT Design to the Didactic-Methodical Design of GameLet

Since the GameLet design is based on the didactic-methodological design of MELT, the MELT teaching and learning process were presented first. Now, the learning missions in GameLet are described.

At the center of a gamified learning scenario is the audio production of a story. In order to do this, students need to improve their reading skills in both their L1 and L2. Working on the audio production alone entails play time and challenging activities related not only to the acquisition of adequate reading fluency, but also cooperation among their team members (Kutzelmann et al., 2017). Dedicated software empowers students to train their reading fluency and create a podcast production. While playing, learners work through necessary learning steps to successfully complete their audio productions. Furthermore, the story fosters identification with the learning activities.

The sequence of tasks during the unfolding story is based on the MELT learning process that pro­motes reading fluency (Kutzelmann et al., 2016). In GameLet, the learning stages of MELT are represented in learning levels. Each level is a mission, and each mission is part of the story (see Table 1).

The objectives behind the learning activities, which are important for the development and promotion of good reading fluency, are as follows: 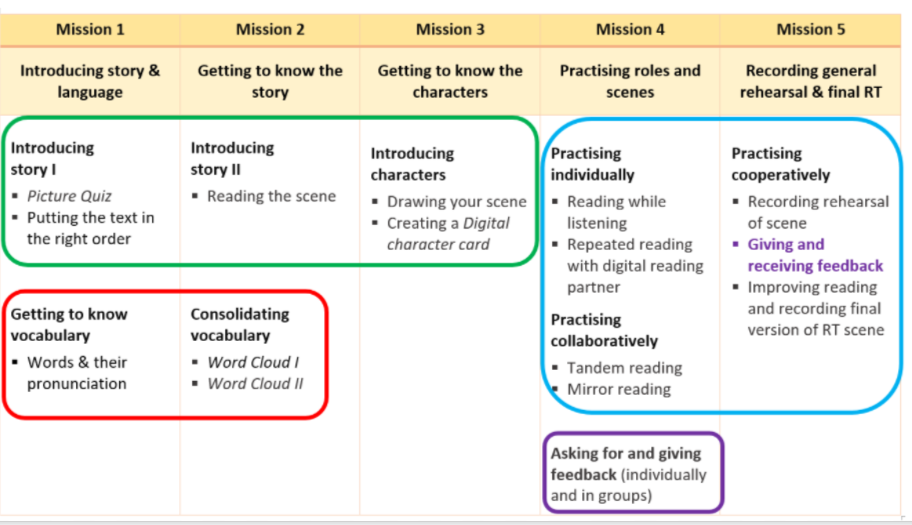 Introduction (Mission 0): Students are introduced to the following points: the concept of reading fluency; its relevance for text comprehension; characteristics of good reading aloud production; use of tablets; and the Recording Studio software.

Getting to know the language (Missions 1&2): Linguistic comprehension of a text and adequate pronunciation are prerequisites for reading with proper intonation and emphasis. For this reason, identifying unknown vocabulary and adding them to a digital Word Cloud during the first script reading is of great importance. The next step involves the focus on translation, pronunciation and meaning of the Word Cloud items as guided by the teacher.

Getting to know scenes, characters and roles (Missions 1-3): An adequate literary understanding of the scenes and of the story is fundamental for improving the overall prosodic composition of the reading. The Picture Quiz game allows students to become acquainted with the story by depicting a central scene that is hidden behind square fields. The fewer the fields needing to be uncovered for story recognition, the more points students win. Games, such as Putting the Story in the Right Order, support student under­standing of the story’s literary key elements: plot, characters, conflicts and settings. This type of game also uses an image central to the story. By dragging and dropping text parts that are hidden behind the illustrations that appear by moving the cursor over them and placing them into an input window, students create a summary of the story. Later, students produce a summary of their own scene and read sum­maries from peers as a means to become acquainted with the story as a whole. By filling in a digital Character Card, which describes the characteristics of their role, and designing a Drawing of a Scene, text understanding can also be fos­tered. Finally, these tasks serve to arouse student curiosity and motivation for creating the audio production.

Practising RF (Missions 2-4): First, students focus on the correct decoding and pronunciation of given lexis. With increasing automatisation and repetition at the word and sentence level, they can then concentrate on how the scenes are divided into meaningful and cohesive sections, while also working on their accentuation, intonation and pauses (Kutzelmann et al., 2016). Using the Recording Studio, students thoroughly practise their reading fluency. The game Emoji Tales helps students recognise and understand which emotions a text conveys for the practice of expressive reading.

Recording (Mission 5): Every group first records their own audio production in a general rehearsal which is then followed by reflection time of its quality. This is done with the help of peer and teacher feedback. Consequently, students are able to improve their performance and record the final version of their audio production.